Hiring someone to work for your company that you call an independent contractor can be risky, particularly because making a mistake can lead to so many federal and state agencies pouncing on a mistake. The bottom line – to be an independent contractor, they really need to have their own company, that they have been operating for a while, that works for a number of others too, and that has its own insurance, ads, business cards, location, way of operating, documentation, business planning, and more. A single person who works mostly or all for your company is…..well….probably an employee. Sorry about that.

In June 2017, the United States Department of Labor (DOL) announced that it was withdrawing two Interpretations issued during the Obama Administration. Interpretation No. 2015-1 addressed the classification of independent contractors under the Fair Labor Standards Act (FLSA), and took the expansive view that most workers qualify as employees and are thus entitled to minimum wages and overtime pay. In January 2018, as we mentioned in our recent mailing on interns, the DOL has revised its test on whether an intern should actually be treated like an employee (and be paid). The new test allows an examination of the “economic reality” of the relationship in order to determine who is the “primary beneficiary” of the work that the intern is doing.  The new test is more flexible than the DOL’s prior guidance, and is intended to be more in touch with the modern realities of the business world.

The test for whether an independent contractor has been misclassified (and is really an employee) will sound similar to that new intern standard. The DOL’s guidance uses an economic realities test that focuses on whether workers are economically dependent on the hiring company or are in business for themselves. The DOL states that a number of factors are helpful guides, including:

Misclassification of employees as independent contractors is also of interest to agencies like the IRS. Worker classification is important because it determines if an employer must withhold income taxes and pay Social Security, Medicare taxes and unemployment tax on wages. The IRS looks at behavioral control, financial control, and the relationship between the parties:

Behavioral Control:  A worker is an employee when the business has the right to direct and control the work performed by the worker, even if that right is not exercised. Behavioral control categories are:

Financial Control: Does the business have a right to direct or control the financial and business aspects of the worker’s job? Consider:

Relationship: The type of relationship depends upon how the worker and business perceive their interaction with one another. This includes:

One tool to start with is the form that the Workers’ Comp Board would ask an employer to fill out if the Board got involved in a misclassification case (which they can). If you want us to send a copy of that to you, just email rwebber@sta-law.com.

Want a good update on this issue and other wage and hour issues? Join CMHRA on March 20 when both federal and state DOL come to LA to instruct employers on what to do and what not to do. Register here: http://cmhra.org/events/#!event/2018/2/20/wage-and-hour-minefields-beyond-the-basics 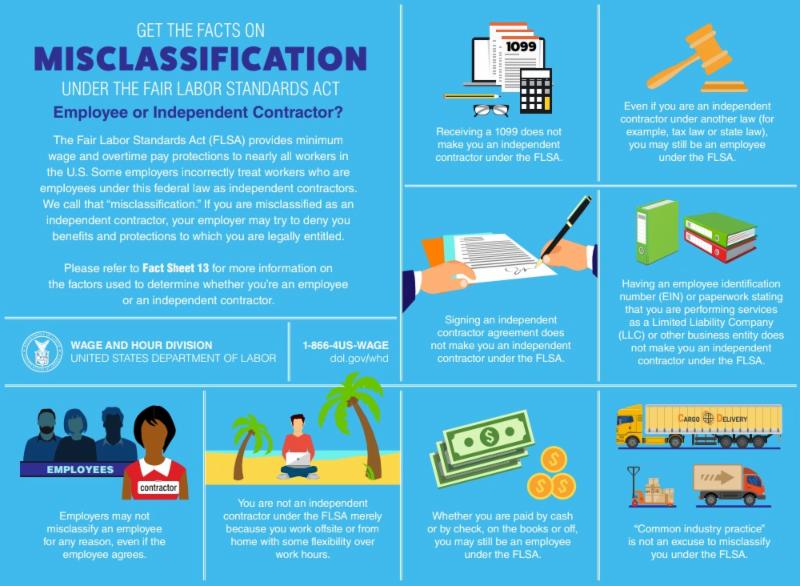 This article is not legal advice but should be considered as general guidance in the area of employment and corporate law. Rebecca Webber is an employment attorney; others at the firm handle business and other matters. You can contact us at 784-3200 (telephone). Skelton Taintor & Abbott is a full service law firm providing legal services to individuals, companies, and municipalities throughout Maine. It has been in operation since its founding in 1853.